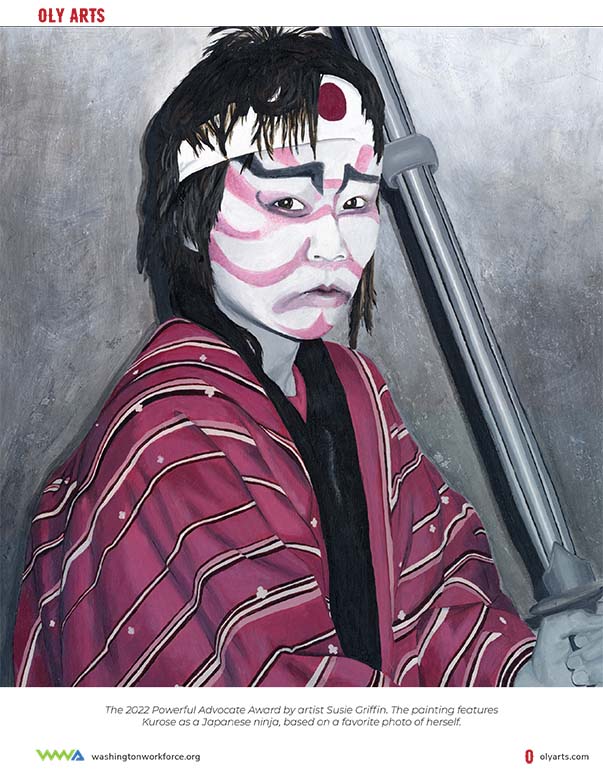 Kurose has been charged with making systemic changes at the Seattle-King council. She’s been working to transform the organization, shifting the focus from simply finding jobs for people who need them to finding high-quality jobs for a broad range of workers, particularly BIPOC people, who have long been underrepresented in more lucrative and higher-level positions.

Her deep commitment to uplifting and empowering workers who’ve been oppressed has earned her both the title of Powerful Advocate — an accolade chosen to reflect her accomplishments — and a painting based on one of her favorite photos of herself. The acrylic painting, by artist Susie Griffin, shows Kurose dressed as a Japanese ninja. “It is perfectly symbolic of her drive to advocate for people who have had their voice diminished and of her passion to stand up and take on the world when needed,” said Sandra Miller, the association’s Executive Director.

The painting also symbolizes the mission of workforce boards, said Griffin, an Executive Assistant for the WWA. She was offered the commission after a colleague spotted one of her paintings in the background during a Zoom meeting.

“Marie has identified and championed countless lives in her sphere in similar ways,” Griffin said.

What distinguishes Kurose’s work, colleagues and friends say, is her focus on collaborating to find solutions and amplifying the voices that might otherwise go unheard. “Marie uses her powers for good,” said Ericka Cox, Chief of Staff and Strategy for the Seattle-King WDC.

Cox noted Kurose’s involvement with the Equitable Recovery & Reconciliation Alliance, a BIPOC-led organization working to rebuild the region’s pandemicdamaged economy while also making it more equitable. “She will take the ERRA leaders with her to meetings with the executives or the mayor,” Cox said. “She opens that door. She’s in a position where she’s asked to come to these meetings, and she brings others with her.”

“The people who would know the solutions are the ones who are the most affected by the problem,” said Michael Woo, Kurose’s husband and a well-known activist. “Marie has always been an advocate for community voices to be part of the conversation that is trying to come up with the right to social problems or economic problems or workforce challenges. She makes sure that she’s including the communities she’s trying to reach and not just to communicate her solution to them but to involve them in the whole process of developing that solution.”

That dedication to building community and connecting with leaders and workers alike has been at the core of Kurose’s career, said longtime colleague and friend Theresa Fujiwara, Co-Chair of the Equitable Recovery & Reconciliation Alliance.

Fujiwara recalled Kurose’s work for the City of Seattle on Career Bridge, a program focused on supporting formerly incarcerated people. “She believed so much in the program that she would spend evenings building relationships with folks who would enroll in the program,” Fujiwara said. “She was a true resource for folks with major challenges. She did everything from designing the program to bringing them into her home and being available to them if they needed transportation. Her role in creating that program is a great example of her dedication to this work. It exemplifies who she is and what she can accomplish.”

“Marie leads with intention and integrity. The Washington Workforce Association is fortunate to have a passionate, driven peer like Marie.”

— Tiffany Scott, former Chair of the Washington Workforce Association and the Chief Executive Officer of the Benton-Franklin Workforce Development Council.

There is no separation between Kurose’s work and her life, her husband agreed. “We’ve had many, many people to our home, and they’re always welcome to return,” he said. “Sometimes in the evening when we think we’re going to spend some time together, the phone rings and then she’s on the phone for a long time.”

Before the pandemic, he and Kurose would host an open house each Jan. 1, when the Japanese community celebrates the New Year. “Marie is a great cook,” he said. “She is the one in our family who puts out this big spread on New Year’s Day. I’m not exaggerating, and we don’t have a huge house, but we’ve had over 100 people in our home over the course of the day. You’d see not only family and close friends but also colleagues and even clients whom she’d become close to. That’s Marie. She’s really open to having community as part of her life.”

Posted in News
See All
News and Insights

Economic Security for All Expansion

Opportunities Across the System